A long time ago, in a galaxy fa… – well, this galaxy to be honest – I complained about the lack of a remix of the ‘Fixation’-esque closing track of Phonic Scoupe’s excellent debut album, ‘Grudge’. But Stripped aren’t known for leaving us disappointed, and they’re back with a full package of new interpretations of the track from Simos Tagias, Dmitry Molosh, Futur-E, and Lateral Cut Groove.

Man of the moment Simos Tagias offers a seductive housey take on Phonic Scoupe’s ‘Grudge, which offsets their melody against slinky bass licks, and letting rich, driving percussion underpin things. This is one of those records that’s perfect for when you want to pick things up a notch.

I’ve been a fan of Dmitry Molosh’s work for a while now, with his remix of Exoplanet’s ‘You’re a Star’ from earlier this year being a particular favourite. His remix of Phonic Scoupe’s track builds up a low-slung progressive groove, before seriously taking off after a minute and a half. The bassline really powers the track all the way to the breakdown halfway through, which teases in Phonic Scoupe’s melody before a really clever and well-executed drop. Absolutely first class work from Dmitry Molosh on this one.

Futur-E leads with Phonic Scoupe’s melody, working it into a mood-setting intro, before the remix drops into a galloping techy workout. The mellow, wistful top end is a nice contrast to the frantic percussion and churning bassline, and some nice snare build-ups keep things moving along.

Finally, we have Stripped regular Lateral Cut Groove offering a tough progressive interpretation, with unstoppable chugging basslines and heavy percussion. Phonic Scoupe’s melodies do get an airing during the breakdown, but even there they take a back-seat to the propulsive basslines.

Well, I wanted remixes of ‘Grudge’. And boy have Stripped and Phonic Scoupe delivered on that – this is a great package, with Dmitry Molosh stealing the top-spot for me. 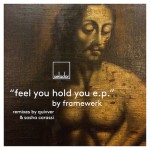