Proton’s latest release revisits the ‘Behind the Sun’ EP from Argentinean producer Juan Deminicis which was released on the label at the start of the year, offering up remixes of the B-side ‘Past’ from Nikko Z and Luis Bondio. The A-side already received a remix package on partnered label Balkan Connection, where it was given a fittingly lovely reworking from Matias Chilano. ‘Past’ wasn’t nearly as strong or as interesting a track as ‘Behind the Sun’ though, and so I wasn’t sure that it was likely to provide much inspiration for remixers.

Actually, Nikko.Z’s version does a remarkably good job of turning the track into a great piece of autumnal progressive fare. There’s a definite nod to the original’s deep house sensibilities, but this remix has much more energy to it, building really nicely with melodic little stabs, a groovy, twisty bass, and rolling snares. The real highpoint comes right in the middle, when a spacious breakdown is cut short by the arrival of a thundering, trancier bassline, which powers the remix into the second half before the original bassline reasserts itself. This is excellent work from Nikko.Z, and it really raises Juan Deminicis’s track to a new level.

On the other hand, I just couldn’t get the hang of Luis Bondio’s take on ‘Past’ at all. I’ve really liked other examples of  his distinctively edgy and techy take on progressive house (including his utterly wonderful collaboration with Santiago Teillagorry also out this week, and reviewed here), but his remix of Juan Deminicis just didn’t hold my interest. The centrepiece is a wobbly bassline, around which Bondio layers warm, drifting pads. But the percussion feels a bit lacklustre, and there just aren’t that many ideas floating around across its eight minute run-time, so it quickly starts to feel very samey indeed.

At the end of the day, I’m not really sure we needed new versions of ‘Past’, since I’m not convinced it showed Juan Deminicis at his best to begin with. That said, Nikko.Z’s version is a bit of a winner, and I’d recommend getting on that. 7/10 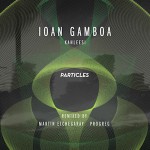