Directed by Tash Tung, who has previously worked with Meduza and Sega Bodega, the arresting, deeply personal video shows a male and female dancer moving skilfully and intimately in each other’s arms – acting as an ideal visual interpretation of the track’s sultry lyrics. The track itself sees MK switch it up from his well-known warm piano house sound in favour of a more progressive flavor.

Released last month, “Body 2 Body” has already racked up more than 1.5 million Spotify streams and over half a million YouTube hits, as it looks set to become one of the songs of summer 2019.

It follows on from last year’s gold-selling single “Back & Forth”, which peaked at #12 in the Official UK Top 40 Singles Chart and remains a mainstay on streaming playlists everywhere. To date “Back & Forth” has been streamed over 60 million times on Spotify. This was preceded by 2017’s “17”, yet another hugely successful Kinchen track, which has amassed just under 120 million Spotify streams to date.

“Body To Body” comes in the midst of a hugely busy summer for MK, who is poised to take the Area10 brand to some of the world’s most sought-after party locations. As well as hosting Area10 stages at festivals including Creamfields, Life Festival and Scotland’s EH-1 in the coming months. MK will also kick off the return of his weekly Area10 Pool Party held at Ibiza Rocks in July and August with a wealth of high-profile special guests soon to be announced. In the US, he appeared at Gather Festival and Movement last month and has club dates confirmed in Miami, Atlantic City, and Las Vegas moving into the summer. 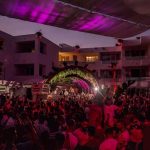