Hi Paul, for those who are not aware can you give us some background about you and what you did before you launched Krafted Music?

Paul Sawyer: I’ve been involved in the music scene since the early ‘90’s as I used to run events in and around Southampton for 10 years. I was lucky enough to work full time as a DJ and promoter during that period, playing at various events like Cream, Bedrock, Renaissance and touring my brand Menage a Trois.

I took 5 years off from dj’ing and got back into it in 2012 after starting my label EJ Underground. I’ve not looked back since as it’s been full on and such a great journey again.

Where does the label name come from? Is there a story behind it?

In 2014 he asked me to join forces with him to host an event at Brighton Music Conference and from that we decided to join our labels together. It wasn’t long when we realised we needed an overall brand and I had it in my mind that music is crafted. So Krafted was born and our labels sat under this umbrella.

Over time more and more people were submitting demos asking to be signed to Krafted, but of course at the time, the labels weren’t called Krafted. I was in San Francisco DJ’ing for Airpusher and took the opportunity to meet with Jacob from Proton in LA. We had a long conversation about branding and we took his advice and renamed everything Krafted. This also included consolidating all our social accounts into one. It was the best thing that we did.

Would you say Krafted has a distinct sound?  Who would you count as your core label artists? And have they helped you define the label’s style?

Paul Sawyer: The labels do have a distinctive sound, Krafted Digital is a Tech House label and Krafted Underground more on the Progressive, melodic deep techno side. Krafted Records is our outlet for the Chill Out albums that Simon Sinfield compiles.

With over 500 releases across the labels, we have so many key artists now and have been so lucky with the number of people we’ve had remixing for us, as well as original tracks. When you start out with the label, you want these bigger names involved and it’s so hard to get to that point. But we now have been luck enough to work with Dale Middleton, Dave Seaman, Robbie Rivera, Nick Muir, Angie Brown, Doorly, Ben Remember, Made By Pete, the list is endless!!

What are the best things about running a label and do you think it’s for everyone?

Paul Sawyer: Its always about a list of goals that you want to achieve. There’s very little money in labels these days, but it’s a buzz to be able to announce Mark Knight or Pete Tong is playing one of your releases, or Armin Van Buuren is playing one at his ADE set. And it’s not just about the bigger acts, hearing a local resident playing one of your releases whilst walking along La Salinas beach in Ibiza, or anywhere. It’s knowing you’re reaching out to people with the music you’re signing, it’s a great feeling.

If you don’t mind pumping countless hours into something that can provide many ups and downs, then running a label is for you. It takes so much commitment, not only time wise, but financially. But, hey, what a great hobby. For me, I love meeting more and more people each year and looking at what each year brings. I don’t think I could give it up again that’s for sure!

What support do you give your artists and what advice would you give anyone looking to get signed on your label?  How people send you demos?

Paul Sawyer: We spend a great deal of time placing tracks on shows, with the right dj’s and licensing tracks to labels such as Toolroom. Last year we licensed 9 tracks to Toolroom and had multiple plays on Mark Knight’s show, as well as on Pete Tong’s show. We try to ensure we give everyone the exposure they deserve, so I also interview artists for magazines that I contribute to, such as Zone Magazine, IUMAG (Ushuaia’s magazine) and DMC World Magazine.

We also ask many of our artists to be a guest on our weekly radio show. Chloe Fontaine presents the show each week and this has been running for over 140 weeks now, which has a massive global reach now. I think it really helps all of our artists to feel a part of what we are doing and it’s an opportunity for them to showcase themselves and their releases on the show.

What’s been Krafted’s biggest achievement or what’s the thing you’re most proud of?

Paul Sawyer: One of the biggest achievements I would say is signing a licensing contract with Toolroom for last year and now this year. I never thought such a huge label would come to us for music. There have also been many great achievements over the last four years. I remember saying to Darren at the offset, it would be great to get our releases on Radio One and now we’ve had multiple tracks played.

Now that your label is starting to become more recognized and trusted, are your goals for the label starting to change?  And what does the future hold for releases?

Paul Sawyer: I think the goals pretty much remain the same, just on a bigger scale. We are doing our upmost at the moment to crack the US market. Jason, our LA based partner has started a series of compilations called DTLA (Deep Tech Los Angeles) which is made up of producers who are LA based and this is growing into events there which involve the people signed up to Krafted from that side of the pond.

DTLA Volume 2 will be out late April and we also have the second Chill out album coming out in May which has some amazing tracks on again.

We recently signed a track from Marc Barnes that features the super talented vocalist and absolute legend, Angie Brown. She’s such a lovely lady too, we are so excited to have this as part of our catalogue. So, this sees the light of day on March 26.

I mentioned Simon earlier as he compiled the chill out album and I signed a track from him this week called Winter Sun. For me, it’s the best track I’ve signed to date. I’m a huge fan of Deadmau5 and this just reminds me of Faxing Berlin and the emotion that track had. This one comes out on Krafted Underground in April, the week before my own release on KU called Janus. Janus features remixes from one of my favourite producers, Dale Middleton and Redux Saints who is our US partner Jason Miller.

Janus forms the first of a series of releases from me on Krafted, the next one ‘Nemesis’ in May has two amazing producers on remix duties, Nick Muir and Moonface.

What are the biggest challenges do you feel the industry is facing plus what tips can you share with other label managers or artists that can inspire them to think outside the box and change the way they’re working?

Paul Sawyer: The biggest challenge is keeping the labels going without getting despondent. You pump in so much time, effort and money in to something that most of the time give you no return. Keeping the momentum going is hard work, but if you look at it as fun, it remains being a fun thing to be involved in. Taking it too serious just makes it into a business. And businesses in the music industry regularly fail.

Finally, you’ve got a release out on Dino Audio this week. How did that come about and what other things have you got in the pipeline?

Paul Sawyer: This came about at such the right time to be honest. I spent the Winter producing a number of tracks ahead of 2018. I find it such a juggling act all the time between my day time job, family life and running the label, that producing tracks is very hard doing when you have little time. So making as much as I could during the Winter was imperative.

I got sent a promo from SMP3 Promo and it was by POok on Dino Audio. I loved it and I used it in my show on Frisky straight away. From that I made contact with Markus from the label and sent him two tracks. He signed them to Dino Audio and it was a great move. He is putting so much effort into his label, its so good to see. I am quite careful where I sign tracks these days as so many get released with no promo and no effort, so they just become another release amongst thousands.

So Apollo / Hades hits the stores this Friday and I’m chuffed to see how much support it’s had already from the promo that went out!

Following this, I have a track on the Chill Out album, which I collaborated on with Simon Sinfield and Janus on Krafted Underground in April. I also have an EP on Robbie Rivera’s label Sixty8 Beats on March 30 and earlier this week, I had a track out called Mock Republic on Pineapple Digital that features remixes from Simon, Redux Saints and Jaap Ligthart. 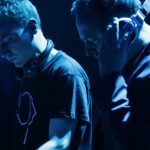