RESISTANCE Ibiza is ready to storm the White Isle for its 2019 season. After only recently wrapping up the debut of RESISTANCE Island at the 21st edition of Ultra Music Festival in Miami, the DJ Awards’ winner for Ibiza Night 2018 has unveiled the season calendar for its third summer on the island. The loaded nine-week residency will launch with its Opening Party on 23 Jul and take place every Tuesday at Privilege Ibiza until its colossal Closing Party on 17 Sep.

The Opening Party is set to kick the season off with a jam packed lineup that is headlined by an Ibiza Exclusive B2B between Main Room Resident Adam Beyer and Maceo Plex. Joining them in the Main Room are Exclusive Residents Sasha | John Digweed and Patrice Bäumel, who plays his first of three shows this season. Next door, Charlotte de Witte, Eats Everything, Hot Since 82 will begin their Exclusive Terrace Residencies and set the tone for their season. Also performing on the Terrace will be English duo Layo & Bushwacka!, who will be playing their first of two Ibiza Exclusive performances.

The momentum continues into Week 2 where RESISTANCE Global Ambassador Carl Cox makes his return to the RESISTANCE residency for his always highly anticipated birthday party. The King will be accompanied by Jamie Jones and Loco Dice who will be going B2B, Charlotte de Witte, Hot Since 82, Eats Everything and Nic Fanciulli, who Carl himself will be playing a special B2B set with in the Terrace to start off the night at 22:00.

Week 3 will see Adam Beyer bring his Drumcode label back to RESISTANCE Ibiza after a highly successful debut showcase on the island last season. For this season’s iteration, the Don of Drumcode is bringing an all-star group that includes Joseph Capriati, ANNA, Layton Giordani, Bart Skils, Joel Mull, La Fleur and an Ibiza debut B2B between himself and the burgeoning Enrico Sangiuliano to close out the night.

Maceo Plex invites Testpilot for a takeover in Week 4, marking a special Ibiza debut and exclusive performance for deadmau5’s techno alias. Meanwhile in the Terrace, Patrice Bäumel will start off the night before handing the reins over to Sasha | John Digweed for one of their highly regarded extended sets.

Richie Hawtin is also set to bring his PLAYdifferently imprint back on Week 8 for RESISTANCE Ibiza’s penultimate show of the season to showcase his industry leading Model 1 mixer. The techno titan will be joined in the Main Room by the high flying B3B of Dubfire, Nicole Moudaber and Paco Osuna, German duo Pan-Pot, and a unique B2B between Ukraine’s own Nastia and Daria Kolosova. The Terrace will be graced by the likes of Eats Everything, ANNA, Fabio Florido and La Fleur.

RESISTANCE Ibiza concludes at its Closing Party on 17 Sep, and will do so in style, calling on some of its foremost stars to wrap up the season. Adam Beyer, Carl Cox, Sasha | John Digweed and Layo and Bushwacka! are all scheduled for the Main Room with Adam and Carl finishing the RESISTANCE Ibiza season with an Ibiza Exclusive B2B set, while Charlotte de Witte and Hot Since 82 will cap off their immense season as Terrace Residents along with Dense & Pika, Deborah De Luca and Luigi Madonna.

Bringing in its most comprehensive lineup yet to the White Isle, it’s clear that RESISTANCE Ibiza will be the event to go to for the best in techno and house. 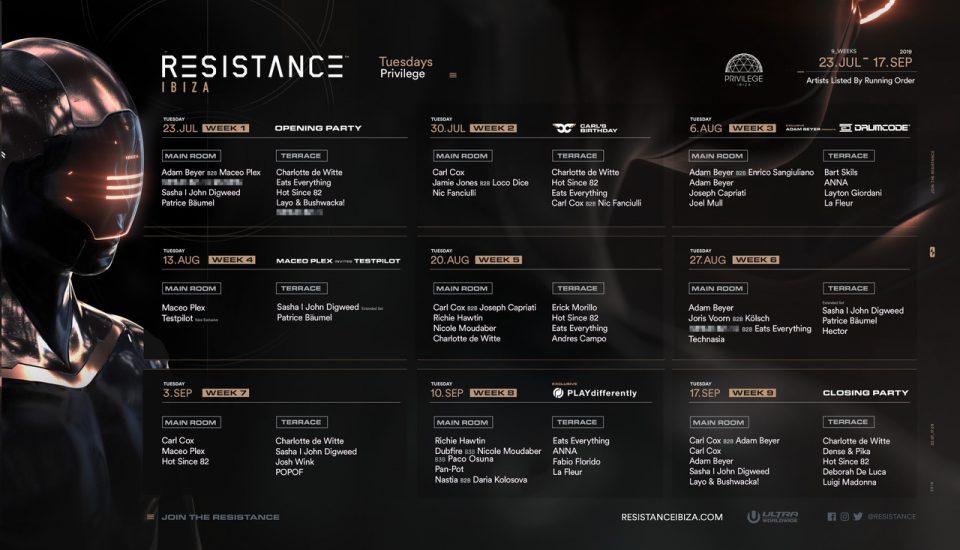