Roel Salemink is a talented techno artist who has often collaborated with Drumcomplex on many high profile releases for labels including Bush, Intec and Phobiq, but he is also an accomplished solo producer soon to drop a new album.

Forthcoming on Carl Cox’s Intec, the new album from Roel Salemink will be the first one produced on his own, so in honour of the release we asked him to pick his Top 5 techno albums of all time…

One is my favourite albums is this one by Laurent Garnier who I feel is a real pioneer in the scene having made a lot of seminal tracks. This album contains a lot of diversity, and keeps you engaged the whole time. For me it is really special that Laurent Garnier now is supporting some tracks from my forthcoming album on Intec, as he has been such a big inspiration to my own music!

This is a classic album that every techno fan needs to hear! It’s got that classic Joris Voorn sound that fits to combine perfectly. I also loved going to see his live sets around the time of this release, as they were always full of power and had a perfect groove. Also his classic hit track “Incident” came from this album. Joris Voorn’s style has moved away from techno over the years, but he still is a quality producer!

I have always been a big fan of Kowalski, and he once remixed a track of mine that was released on Phobiq, which was of course a great honour for me. “Echoes” is an amazing album that really tells a story. Each track on it is top quality from start to finish, and it’s filled with some of the finest melodies I’ve ever heard.

Ever since I was a youngster Tom Hades has been one of my favourite artists, and I’m still a big fan of his today. Tom inspired me a lot and I’ve been lucky enough to have worked with him a few times. Together we also remixed a Carl Cox track on the legendary Bush label. Tom Hades album “The Missing Touch” is really something that’s perfect for the dancefloor, and I still play tracks off it in almost all my DJ sets. His energy is unbelievable!

This one is in my top five because I have some good memories about making this album. It was an intense process with my friend and studio partner Drumcomplex. It was also a big step for us to do an album together. It was released on Carl Cox’s Intec, and it really opened doors for us both. The album also meant we got to play gigs with Carl Cox at places like Space Ibiza, Awakenings and many other amazing gigs. I learnt a lot from that release, which has helped with the production of my solo album, but most of all… that hard work pays off! 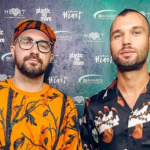 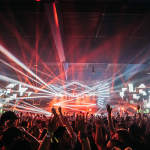