1. Hi Valeriy, thanks for joining today, how old are you, where are you currently based?

Hi Mitch, thanks for the invitation. I’m 26 years old, live in Chelyabinsk city, it’s in Russia!

2. How long have you been producing and Djing? and how did you get into electronic music?

I began to work as a DJ and create music from the beginning of 2011, when I was 19 years old. Till 18 years old I practically didn’t listen to electronic music. I have started to study the music program and created my own tracks after I heard a collection of tracks on the disc, which my friend gave me to listen to! Basically it was a progressive house with notes of neotrance. I began to wonder how it was created and every time after studying at the university I spent many hours at the computer.

3. What is the state of electronic music in Russia at the moment? Is it still growing in your opinion and how is the night life there? Do you get a chance to DJ much in your home country?

Surely, it is still developing! In my country there are good musicians who have reached great heights. I like the works of the guys Fake Mood, Modd (St. Petersburg) and Dmitry Molosh (Belarus). Now about the events! Interesting parties are held mainly in big cities such as Moscow, Petersburg, Ekaterinburg, but in my hometown sometimes there are good parties with the participation of foreign DJs. I have already been 3 years earning only DJing! I perform in my city and in others, including touring throughout Russia.

4. What was the first amazing moment you had in club? A memory that stands out for you.

In 2011, I started going to clubs. In the City we have several of them, where I like music. As a rule, these are not even clubs, but rather after party bars. It seems to me, the first amazing moment was one of the first sets, when you’re playing, and people are dancing, you’re in the same rhythm with them during the night and every week like that, and  want more and more!

In addition to the music I create, I like playing music in the styles of Indie Dance, Soulful House and Disco. There are a lot of tracks I played in my DJ sets and in this style. But again, everything depends on the place. But OK, I tell you a few of these styles and sounds that I write:

6. Who was the first big Dj to support your music and how important was that moment in terms of inspiration as well as being validated as an artist? and where else does your inspiration come from?

The first big support went in 2013, when I wrote Progressive House and Trance. Certainly, they are Above & Beyond, Ruben de Ronde and Max Graham! Thanks to these guys, they gave a definite impulse and stimulus for development. Despite the fact that over time I changed the sound, I still appreciate these moments. I get my inspiration, like many artists, from positive and not only positive moments, trips, brilliant performance, etc.

7. You have a new EP out this week Timeless Moment, a three track, progressive minded release alongside remixes from Morttagua and Danny Oliveira.  Tell us how you approached writing the tracks, the thought process behind the remixer selection and how the project ended up on Timeless Moment?

Yes! I worked with those tracks for a long time. There is a part of me in each tracks at that time of creation. The main track EP “Viento” will work fine in large places. In the track “This Night” is a combination of vocals and a lyric piano moving into underground. “I Will not Forget” is perhaps the most melodic track from the single, in which we hear a longer and more open melody with an interesting culmination, I like listening this track  in the car at a night.

We are friends with the owner of the label Danilo Morttagua long time. Before that, I published two EP single on his second label House Mag Records. When I sent Dan my 3 new tracks, he liked it, especially he was delighted with the track “Viento” and we immediately agreed on a remix and Dan suggested to publish the EP on his new label. More melodic and deep Timeless Moment! And I gladly agreed!

Danny Oliveira made a good remix on the track “This Night”. He did an excellent job of showing the dark side of the original using vocals. Main track “Viento” has already received support from Tiesto in the radio show Club Life 538 on the last weekend! Also we can see, on the first day of release my new EP Viento is on the main page of Beatport in the section Progressive House! The release received support from the likes of Eelke Kleijn, Richie Hawtin, Marco Carola, Paco Osuna, Darin Epsilon, Marst, Paul Oakenfold, Graziano Raffa, Tiesto, Dashdot, Ad Brown and many others.

8. What can we expect to see later this year from you? Anything you can tell us about?

This year I wait several releases. One of them will be held soon on the Nagual Research label, owned by THe WHite SHadow (FR)

9. What artist would you love to collaborate with and why?

I like the work of the musician from Spain Edu Imbernon. He has awesome melodies in his tracks. There are notes of lyrical mood and they deeply penetrate into the soul! But for this I have to work more, because the artist has a high level, undoubtedly. In the future I would like to release on Diynamic whose owner is Solomun.

10. There are countless producers out there trying to find their way and create their own unique sound, what advice do you have for them?

Interesting question! I’ve never imitated anyone and never tried to be like anyone else. Always I’ve composed what I want, so in time I found my sound. For beginners I would advise to immediately choose the closest style of music to them and listen more tracks in this style, remember features. They should have more practice, try and try. Anyway it will turn out in own way. And the main thing is never to compose against yourself, what you don’t like, because people feel when you create the music from your heart.

11.  What are your five favourite tracks at the moment?

It will be difficult to call just 5 tracks, but I think I can choose some of them I really liked recently:

‘Viento’ is out now on Timeless Moment, you can purchase the release: here 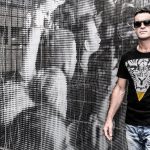