Dutch artist and DJ Sander Chan has been a prominent figure in Eindhoven’s nightlife for several years. We chat with him about his ‘MASCHINE’ techno events, rediscovering his passion for making music and a new single due out soon on Lessismore.

Hi Sander, thanks for joining us today, tell us a bit about yourself, where are you living and how long have you been producing music and DJing?

Thanks for interviewing me! I’m a 32 year old techno DJ and producer from Eindhoven, The Netherlands. I started DJ’ing in 2004, so 14 years already. I discovered Fruity Loops when I was in high school and experimented a bit with it, but my attention span was too short to really go for it. That must have been around 2002/2003. I’ve found my old files some time ago. So embarrassing to hear these super bad tunes I made at that time! But hey, you got to start somewhere.

Since that time, I’ve been producing on and off. I made the transition to Ableton Live around 2009 I think. Played around a bit and made some crappy things, but I didn’t take it so seriously. Then around 2016 I was unhappy with my job. I wanted to DJ more and take music more seriously. I started organising parties and getting gigs and I finally had the energy and calmness to pick up producing again.

Being from the Netherlands it’s hard not to be influenced by electronic music. As a child in the early 90s I digged that eurohouse stuff like 2Unlimited, Culture Beat and Technotronic. When I got a bit older I loved gabber, as did practically every kid in the Netherlands. When that died I followed the trend and listened to stadium trance by Tiesto, Ferry Corsten etc. So basically my whole youth I’ve been listening to electronic music. Only when I got a bit older I started to listen to bands.

When I started going out I listened to industrial hardcore a lot and went all extreme into the techno and breakcore scene. Through that scene I started listening to Venetian Snares and other experimental stuff and got really intrigued by Aphex Twin and eventually ended up in techno.

Nowadays you can still hear those influences in my DJ sets. Sometimes I play a hard techno track by The Mover and sometimes I play some old trance by Push, Yves DeRuyter or Age of Love.

Tell us a bit about the scene in the Netherlands and more specifically Eindhoven where you are based.

The scene in Eindhoven is quite good. It’s a small city, about 240.000 inhabitants, so it’s not like Amsterdam, but it’s still quite good. Techno is very popular, but there are sold out drum ‘n bass and psytrance events too. Together with my girlfriend I organize MASCHINE, a dark techno party.

What I like the most is that the scene in Eindhoven is not pretentious at all. You see a mix of ages, clothing styles, sexual orientation, etc. Everyone is accepted. Eindhoven has quite a history in the electronic music scene. One of the first techno labels was from Eindhoven, Djax-Up Beats by Miss Djax. And one of the first electronic music productions were made in the lab of Philips Electronics in the 1950s. Check out Kid Baltan on Youtube. It’s a pseudonym of Dick Raaijmakers, an engineer at Philips whom created awesome electronic music in the 50s.

How has living there affected the music you make? Or has it at all?

It actually did. Originally I’m from another town, but I moved here around 10 years ago. The history of Philips, abandoned factories and the techno history of Eindhoven have certainly influenced me. Eindhoven is both a worker’s city and a high-tech city with super smart engineers, so many people like to dance to hard music and just forget about the weekend, while others are really into deep “robot music”. There are many people here who just like to freak with modular gear. Many of them don’t even release music or have the ambition to do so, they just love playing with electronics, experimenting and see what happens. I like that mindset. There’s no need to score or to create a hit for them. The balance between this primal, energetic dance music and music with brains is what I hope to find in my productions. I feel like I’m still searching for my own sound, but that’s what I definitely aspire.

You have your own night there called ‘MASCHINE’, how long has it been running and what’s the vision you have for it?

MASCHINE started in 2016. A few clubs in town closed and Joanna (my girlfriend) and I were fed up with the local scene, so we decided to organize something ourselves. We wanted a party with a bit of darker techno, but the music shouldn’t be too simple and hard. Since we’re both of mixed ethnicities we wanted to attract an open-minded, accepting and internationally oriented crowd. We’re really happy with how it turned out. When you’re walking through the audience it feels like it’s one big family. MASCHINE always attracts a lot of international students and expats, but also great people from Eindhoven of course. There are even people who are not that much into darker techno who still come, because of the vibe. We moved to a different location a few months ago. In here we have the opportunity to professionalize it a bit. Their sound and light is awesome and we can do more parties per year.

You’ve got a new single in collaboration with Alexis Tyrel out this week on Lessismore, tell us how the project came together and why it made sense to release them on the label?

It’s quite a surprising story. I bought the Push 2 midi controller for Ableton and just played around on it. The first sketch I made was a rough version of The Waves (Day Mix). It’s not really a style that I usually make, but I was so happy with my Push 2 that I made a video of me playing with it. Alexis Tyrel saw it and sent me a PM if we could meet. He really loved the track. It was not finished yet, but we met and worked on it together.

Walk us through the production process on one of the versions of the track, take your pick.

I’ll pick the Day Mix of The Waves, cause that was the original. Usually I start with a beat, but this time I started with the bassline and melody. As mentioned above, I love the Push 2. I was playing a bit with the repeat function and suddenly I ended up with the bassline of The Waves. I played it on a loop and in my head I could hear the melody that was missing. Later I added the trancy pads. It was Alexis Tyrel’s idea to make the pads more prominent in the track. I thought it was too trancy at first, but in hindsight it was a good idea. We met a few times in the studio to mix the sounds. It’s unbelievable to hear the difference between the original sound design and the mixed sounds.

There’s a unique blend of progressive house and techno on this release, what do you want your music to convey to the listener?

The Waves is a bit more tech-housy than what I usually produce, but you can definitely hear a common denominator in all my music. It’s usually quite dark or melancholic, but there’s always a melodic element. Even in my darkest and hardest tracks there is a melody. Probably my trance background has something to do with it. I’ve always played sad and dark music. Somehow, I’m always drawn to it, even though I’m quite a happy person, so don’t worry, I’m not depressed haha.

Is it true the first time you worked with Alexis was by throwing an illegal rave? Tell us about that.

Yes, we organized a rave in a tunnel. He had organized a few illegal raves around 15 years ago and I had organized one with my girlfriend last year. When we met, we thought it would be cool to organize it together with two other friends. It’s always exciting, cause you don’t know how many people will come and if the police will show up. Fortunately, we could party till the morning and there was no police at all. It’s heaps of fun, but a lot of work too. There are no facilities, so we cooled our drinks in an inflatable pool with ice. One time the generator stopped working, but we managed to fix it. When the music turned on again the crowd was ecstatic! One of the best parties of my life.

What’s in the Sander Chan studio? What can’t you live without?

I work in Ableton Live. I don’t use a lot of hardware, basically just my Push 2 and an M-Audio midi keyboard. The main synths I use are Reaktor, Serum, Kick2 and ABL3 (a 303 emulator). Serum is the synth most of my sounds are coming from. It’s a fantastic sounding synth for electronic sounds. It’s very user friendly as well. More organic sounds I usually get out of Omnisphere.

What are some of the biggest challenges you face as an artist in the current state of the industry?

For me it’s mostly personal issues, such as having too little time and having too many hobbies. I have a full-time job and family life. I’m also a thaiboxing instructor and I organize parties, so I don’t spend as much time producing as I would like. When it comes to the industry, what often bothers me is that social media plays such a big role. It sometimes feels as if your social media presence is more important than your gigs or productions.

Albert van Abbe currently is the biggest name from Eindhoven. He has a deep and non-compromising sound, which I like. JP Enfant is another nice upcoming artist. He’s playing at our next MASCHINE party on 21 December 2018. He’s played Dekmantel and DGTL and is the owner of LET Recordings (Les Enfants Terribles). Hakim Midhat is a friend of mine from Eindhoven who’s really progressing as a producer. He’s a good DJ too! He just released his first track.

1. Introversion – Challenger: it’s hard, but melodic.
2. Benjamin Damage – Off World
3. Judas – ID 8
4. Anything by Thomas P Heckmann. That guy is on a roll. He’s made fantastic tracks in the 90s, such as the classic ‘Amphetamine’ under his Drax Ltd II alias. Now he’s combining techno with EBM.
5. And anything by 999999999, Minimum Syndicat and Under Black Helmet. They each have a great combination between oldschool rave, acid and techno.

What can we expect to hear from you next? Anything you can share with us?

I’m in the studio working on a lot of new stuff. Hopefully some collabs with Alexis Tyrel again. So keep an eye on my soundcloud and Facebook page. 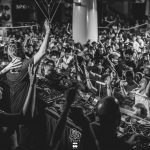 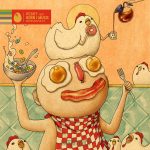