And they’re kind of a big deal…

With people still basking in the greatness of Terminal V Easter Festival, the team now announce a special 11 hour edition of the event at the Royal Highland Centre in Edinburgh that is set to be the biggest Halloween party in the country. It takes place on Saturday October 27th for an all day extravaganza with up to 10, 000 people and a first wave of names boasting world beating headliners The Black Madonna, Len Faki, Moodymann, Eats Everything, Robert Hood and another ten acts yet to be announced

Once again set to capture the unparalleled party vibes of Terminal V back at Easter, this fully themed Halloween event is in the Royal Highland Centre in the grounds of Edinburgh airport and promises to be another electronic odyssey of the highest order across multiple rooms and stages. With no expenses spared on production, you can expect it to be an immersive and atmospheric Halloween experience that brings out all the freaks and ghouls for a spooky night of spine tingling fun that will set a new benchmark for the country. By now, the Nightvision team behind this festival are really shaping the Scottish scene and continue to bring the biggest names in the world to the city.

First up is The Black Madonna, the American party starter who has headlined every major club and festival in the world and become a strong ambassador for the scene. Then there is Berghain regular and esteemed techno tastemaker Len Faki, who has a broad spectrum of sounds in his vast collection. Next up is a true legend and rule breaker: Motor City hero Moodymann makes intoxicating, sample heavy house that draws on funk and soul and as a DJ is a real risk taker who always makes the headlines.

Next to him is bass loving Bristol man and globe trotting house, jungle and techno star Eats Everything, with another Detroit originator in Robert Hood also playing. The M Plant label boss has pioneered minimal techno and gospel tinged house for decades, and he will be joined by many more names to come to make this an essential event once more. 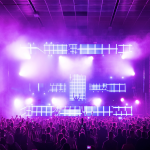