Previous Next
Andrew Tate making an appearance on The Fellas podcast.

Andrew Tate has created a firestorm on social media over his comments regarding women, gender, business, and class.

Tate is known for his controversial “takes,” which he uses to gain clout and followers, primarily men, who see him as a role model or idol. Before becoming an internet personality and business owner, he was a kick boxing world champion.

The fun for Tate is now partly over after Meta, the parent company of Facebook and Instagram, banned him from their plaforms. The former-kick boxer had 4.7 million followers on Instagram and he is unlikely to be able to recover his acount anytime soon. The company told NBC News that Tate had violated the company’s policy on dangerous individuals which also led to the deflatforming of Alex Jones and Donald Trump.

In 2017, as the Me Too movement began to gain traction, Tate was banned from Twitter after tweeting that victims of sexual violence should “bare some responsibility” for their attack.

While Tate is riding the a new wave of internet fame this summer, in April, the Romanian police broke into his compound after they received a tip that a US citizen was being held against her will. The allegations went further and alleged that Andrew and his brother Tristan, forced the women they were holding into sex work.

After the raid, he took to Instagram, where he posted a picture in a fake interrogation room, smoking a cigar, with the caption, “Officer…l think we can all agree that bitches love to lie.” In the case the allegations were fake, this is no way to discuss the very serious charge of sex trafficking, sexual violence, and abuse. This type of language trivializes the experience of millions of people, around the world, who are forced into sex work against their will.

The investigation is ongoing and no charges have been made so far.

After seeing a woman make a “U-turn into oncoming traffic,” Tate thought to himself, “how are women allowed to drive?”

This point was rebuked by Hasan Piker, a leftist Twitch streamer, who ‘debated’ Tate, arguing that the empirical evidence was not on his side and that one’s biases, beliefs, and lived experiences are not suitable to create societal truths.

“There is truth and then there is your own personal experience backed up by anecdotes,” said Piker.

The debate with Piker came after Tate made similar comments during a debate with Twitch streamer XqC, who also went after the former-kick boxer for his remarks on women. Tate responded by attacking XQC, saying, “Women can’t drive if that upsets geeks like you, […] I don’t give a fuck. That’s what I say. If it upsets people, tough, that’s my personal experience, you are going to have to get the fuck over it.”

One could, like Piker, go through his agrument and show that there is evidence to suggest women are better drivers than men, but that would not be enough for Tate and his followers.

Instead, a question emerges. What is the point of making these sweeping generalizations?

Is it a policy suggestion that countries eliminate the right to drive for women? Tate has said that this is not his intention to limit the ability of women to drive. This deflection is, undoubtedly, a critical way Tate distracts from the power his language has on his followers. It is also advantageous for him to take that stance because personal and anecdotal experience often fails to convince people that a particular policy choice should be made.

Consider the inverse and how easy it would be for a woman to say that all of the all the accidents they have been involved with were the fault of men, leading them to believe that men should not be allowed to drive. The reason societies look to empirical evidence is not to show that women are, in fact, good drivers but because within public discourse, personal experience can make for a poor arbiter of good and bad social policy.

If Tate says makes these comments to get views and followers, this is equally as problematic and concerning. Teenagers across the gender spectrum can be more impressionable than adults because they have a specific lived experience, where they may have not been exposed to as many people or ideas. This reasoning for making these comments makes more sense, particularly because of the type of product Andrew is trying to sell: Hustler’s University 2.0.

The educational program, has been called out by many as a multi-level marketing scheme, which is why he is appearing on so many platforms. Those hoping to sell the product have an interest in selling Andrew’s brand and getting their affiliate link out to as many potential people as possible.

2. On why he lives in Romania

One fact about Tate that surprises people is that he lives most of the year in Romania.

Tate has given many reasons for why he chose to move from the United Kingdom to Eastern Europe.

Often his answers speak to something many on both the right and the left feel, that governments are corrupt and countries are full of corporate greed and corruption. In Romania, Tate believes that while it is corrupt, anyone can take part in that corruption.

“I like Eastern Europe as a whole because corruption is far more accessible,” said Tate while adding how he enjoys being able to buy off cops and other law enforcement officials so that they do not infringe on his business operations and personal habits.

The admission that he participates in corruption begins to raise many questions about the legitimacy of the investigation being lodged against him.

Another reason he has given, on The Fellas podcast is based on the failures of “western society.”

“Western society is degraded and […] corrupt,” said Tate, adding that “there is something that very much angers me about the western world. […] I don’t like the way it functions and operates,” the former kickboxer replied.

Romania is a part of Western society. It is both a member of the European Union and NATO.

It unclear whether or not Tate would agree with this supposition. Regardless, of if he would or would not, it doesn’t really matter, since much of his world view is based on sweeping generalization, and he may be weary of academic research on the geopolitical and historic context under which Romanian politics and culture exist.

Tate calls himself a feminist and often does so when being attacked for his abhorrent views on women and gender. We have yet to see anyone push back on this point by asking, for instance, his definition of feminism.

During discussions, Tate often compares women to children or cars to argue that he has a duty to protect the people and objects in his possession.

When interviewed by the BFFs podcast, Dave Portnoy told Tate that he believes that while there are “plenty of women who would enjoy being in a relationship where a man is filling traditional gender roles,” other women “view themselves as every bit the equal of a man” and do not want that sort of relationship.

Tate responded by saying that if a woman were to see herself as equal to a man that she would be “the exact kind of woman that I would never give my time of day to.”

“Any woman who is going to sit there and think it’s more important to argue with me about she is as capable as a man at everything, […] as opposed to just letting me pay the bill and be pleasant, is not the kind of woman I want to talk to,” said Tate.

Tate sees protecting women as his “masculine imperative,” which begs the question of what women need protection from… If it is men, then it seems this toxic, hyper-masculine, sexist ideological worldview does not make women much safer. The idea that a women would threaten the “masculine imperative” by paying a bill or not acting “pleasant” brings to mind a quote from novelist Margaret Atwood who said, “Men are afraid that women will laugh at them. Women are afraid that men will kill them.”

4. On comparing women to dogs, children, and objects

The infantilization and dehumanization of women are one of the most played out sexist tropes. When hosts push back, he always retreats by saying things like “I love women. In fact, interesting statistic, one hundred percent of the people I have ever had sex with are women.” It does not take more than three braincells to know that nothing about having sex with women, one, proves that you love them, and, two, that aren’t anti-women, a sexist, or a misogynist.

Tate will argue that the comparison to non-humans, objects, and children are just examples. If this is true, and he is so smart, he should probably update his references because these are tired. The paternalistic treatment of women has long been used as a way to justify, both, decreasing the agency and autonomy of women to make their own decisions and allowing them to aquire the resources to live an independent and dignified life.

5. On using women for monetary game

One of the main questions people have about Andrew Tate, as someone who markets themselves as smart businessman who can help others get rich, is how he made his money.

On another “manosphere” podcast, Fresh and Fit, the hosts asked Tate how he began his business career after his fighting career came to an end. He began by doing reserach into money, banks, and the financial system more generally. Then, he began to make a list of his assets, a car, an apartment in London, $10,000 in the bank, and, his girlfriends. During his career as a fighter he had begun relationships with women in countries all over the world. Andrew Tate saw his girlfriends has monetary assets he could exploit, just like his savings.

“I could open a strip club, but that takes money and I need overhead, I need money. How can I use these women to make me money,” he said on the podcast. He decided to go into the webcam industry, which is where he really began to build his personal wealth.

“At the height of my webcam pimpin’ I think I am the king of the world […] the problem is the first two girls worked for me because they loved me, […] but once you get bigger you start hiring girls who don’t love you. They are in it for the money.”

This is a ridiculous notion. If a women is working, she is going to expect to get paid in real money not just love from someone who calls himself the “Top-G.” It is clear that he was chasing a check but when one of his cam-girls wanted to do the same, she was vilified for not accepting love and protection as a form of payment. 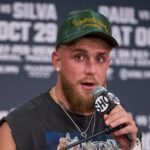