Han’s baak! The mysterious London-based producer Han Haak returns to Selador after something of a gap following his awesome ‘Redemption’ EP on Sudbeat a year ago, flanked by remixes from Robert Babicz, Dave Seaman, and Ki Creighton & Makanan.

‘Insipid Town’ attacks with delightfully punchy percussion, giving DJs plenty to play with before fierce growls and a wicked bassline let their presence be felt. Urgent bleeps sound the alarm as the track powers into the breakdown, where Han Haak creates a mini-‘Rez’, with electrifying and hypnotic synths, until the kick-drum thunders back to life. It’s really simple, keeping the number of elements to a minimum, but it’s so, so effective – brilliant stuff from Han Haak. Kicking off the trio of heavyweight remixers, we have the master and the man behind possibly Selador’s strongest release to date, Robert Babicz. His take on Han Haak’s track is nicely understated, with cool acidic underpinnings, a clever use of the growls from the original, and a trademark Babicz groove giving the remix plenty of floor-power, while a dreamy, melodic quality gives it a quite different flavour overall. The acid licks intensify as the track progresses, leading to a spellbinding breakdown and an explosive finale. Selador’s own Dave Seaman makes his first appearance on the label since casually dropping their huge 50th release back in August. His remix of Han Haak’s track is dark, percussive, and heavy, with a huge, key-shifting bassline motoring to life around the minute and a half mark and commanding attention for most of the rest of the track, while otherworldly loops and morse-code bleeps keep up. There’s not much let up here – the track just keeps coming at you, Seaman seriously weaponising the bassline in the second half of the track. Finally, Ki Creighton & Makanan offer up the sequel to their awesome remix of Steve Parry’s ‘Apricity’ earlier in the year with a characteristically bouncy tech-house version of ‘Insipid Town’. which pitches a churning bassline against strong percussion and cool stabs, before working in twisted interpretations of Han Haak’s ideas to great effect. The dual-snare-build in the middle of the track is clearly designed to absolutely take the roof off – it’s really well conceived and executed, and it’s bound to do just that. 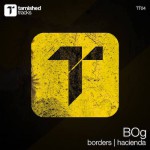 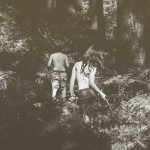