I’ve been keeping a close watch on Oovation ever since his debut on Univack with the outstanding ‘Der Aufstand’ early last year. ‘Devotion’ sees him leaning towards a dark, bass-heavy melodic techno sound again, with brooding bass tones meeting fluttering, urgent melodies, but Laura Barrick’s heavily manipulated vocals really add something special into the mix, as do the funky bass flourishes that pepper the track.

Ryan Davis has been a little quieter since his stunning 2012 album ‘Particles of Bliss’ (though 2013’s ‘Creatures’ with Applescal is easily one of his best ever pieces of work). His remix of Oovation’s track sees him skirting the boundary between breakbeats and more straightforward house rhythms (a trick we’ve heard Davis use effectively before on his remix of Kres’s ‘Hang Glider’ from a few years ago). A minute and a half in, and we’re hit with both light and dark simultaneously – the drifting vocals from the original and a wall of bass. Davis keeps the tension levels sky high as the kick drum settles into a four-to-the-floor thump, the bassline goes on the prowl, and the rest of the track whirls around them, leaving the final minute of the track to pick up the pieces. Fantastic stuff from Ryan Davis – if there’s a complaint to be had here it’s that in writing this review I lost about two hours reminding myself of his incredible back catalogue (and I could easily have lost several more if I hadn’t have been careful).

Boss Axis are also making their debut on Univack here, having supplied a great deal of very fine music for Parquet and other labels over the years. As one might expect, they give ‘Devotion’ a housier feel, with a cool electro-stabbing bassline and swinging percussion setting the stage for a hypnotic take on Oovation’s melody line and snippets of the original’s vocals. This is a great, chunky, floor-oriented interpretation that is likely to give the track a broader appeal.

I have to admit that I haven’t keep as close a watch on Dresden-based producer Talul as I should have been (though the Einmusik remix of his collaboration with Soul Button earlier this year was – and remains – a real favourite). But this is easily my pick of the four versions of the track; actually, it’s easily one of my favourite records of the past few months. It’s an absolute dream of a track, which see Talul wisely put the vocals front and centre, letting Laura Berrick sing a futuristic lullaby over soft pads and mesmerising washes of melody, while the distinctive vocal hooks from Oovation’s original are particularly well-utilised, adding to the remix’s otherworldly feel. This is a thing of considerable beauty.

This is a very strong package from Oovation and Univack, with Talul’s emotional interpretation providing a memorable highlight. 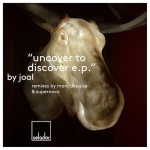