Currently living in Spain, she is already known on the global techno scene having been a regular DJ booking at places like Egg London, along with other venues ranging from Asia to North America.

Not only is she an emerging talent behind the decks, her music has also been championed in the sets of genre leaders ranging from Carl Cox to Pan-Pot.

The opening track “Furia” has stabbing synths influenced by the classic Detroit style, and the third of the three tracks “Final Moment” is a deep roller with sparse acid, but our personal favourite is “Delirium Tremens”.

“Delirium Tremens” has a pounding kick drum and seductive atmosphere with hints of euphoria from the pad and vocal hook.

Overall this is a fantastic release and we are proud to present this premiere of “Delirium Tremens” which can be pre-ordered from HERE. 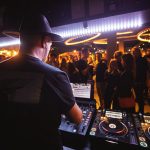