This week, key figures from the dance music scene got together to share their stories about the late Andy Jarrod, and revealed why his contributions were so important.

Former 3 Beat Records employee Steve Parry, now owner of leading DJ promo agency SMP3 and co-owner of Selador Recordings together with Dave Seaman, was deeply saddened by Andy’s passing and had been hugely influenced by him “From his days at Unique Distribution, later working at 3 Beat and launching both 3 Beat Digital and 3 Beat Label Management, Andy was ambitious, hard working and forward thinking. He also wanted to help others and used his expertise to do so. When you realise, the greatness of those who trusted and worked with him, you begin to realise the scale of his knowledge…“

Pezz was a director at 3 Beat Label Management and spoke about how Andy pitched him to start the company. “I met Andy around 1994 when he used to come into 3 Beat the record shop as a customer. We immediately hit it off as our musical tastes were almost identical. One day he called me asking if he could set up a meeting as he had a big idea.He came over and told me that he wanted to start a label management business. He had a few labels who were up for it and just needed a home for the company. All his labels were progressive house based and 3 Beat was the world leading record store in the genre at the time, so it seemed like the perfect partnership. I immediately jumped on board and helped him develop the idea. We built a business plan which was presented to 3 Beat’s MD, Jon Barlow. It didn’t take us long to convince Jon because the idea was really great. And so 3 Beat Label Management was born. We worked together for 7 years on the project, which helped nurture the talent and labels for many underground stars.”

When you realise, the greatness of those who trusted and worked with him, you begin to realise the scale of his knowledge… Steve Parry SMP3 and Selador Recordings

One of the stars Andy helped was legendary producer and Border Community label boss James Holden, who explained “I met Andy after just escaping a dodgy record label and dodgy manager and felt pretty alone in the industry. I was lucky to meet him. He was so open, honest and decent that we trusted him to help us start our own label. His experience and professionalism made possible something we couldn’t have done on our own. As the label grew and grew and the world went a bit Border Community-mad, Andy’s level headed business wisdom helped us navigate that, but all the while he had the utmost respect for why I sometimes liked to do things my own way. Without him, none of it would have happened and Border Community wouldn’t exist. Several musicians owe their whole careers to Andy’s work.”

Mike Miller, worked for Andy as a label manager at 3 Beat Label Management and told us “Andy and I got to know each other in the late 90’s, initially through me hassling him for promos as a young DJ hunting for the best new music, which then over a short time developed into me moving to Liverpool to work for nearly 5 years as his label manager at 3Beat Label Management, quite possibly the coolest job in the world. When he offered me the job, it quite literally changed my life forever and is something I’ll always be in his debt for. It opened up a door into the music industry and gave me the chance of a lifetime to work with some of the coolest and most influential producers, DJs and labels of the era.”

Circus‘ head honcho Yousef was another one of Andy’s star clients. “Andy was ready to take chances, always striving to push the scene forward plus ready to help newer names, as well as known industry figures. I’d been in and around Liverpool djing for some years. Was resident at Cream and then set up Circus. My record label Carioca had fallen by the way side due to its functioning father “Underwater Records” folding. I was stuck with a series of great tracks and artists, not much idea about the back end mechanics of how to manage a label. Andy somehow heard I was in a little trouble and stepped in to take Carioca under his wing, with few questions asked. We really worked well together and he supported me entirely when I wanted to develop my “friends” album project.”

Andy was no stranger to production too. His friend Barry Gilbey, owner of the highly respected Choo Choo Records back in the day, said he was a true inspiration and would be missed forever “He was always incredibly funny to work with in the studio and loved coming up with the craziest names for tracks, only for me to try and tame them a little… our single together called “Corixa” was originally to be called “Corixa Lesser Waterboatman” and “Monkey Trousers” was “Monkey Trousers – The Geordie Space Centre” after the Reeves and Mortimer show!”

Barry continued “He was always so playfully stubborn that it was always a massive struggle to get him to accept the shortened names. He loved Monkey Trousers so much that whenever anyone said the name, he would recite parts of the show. When we were djing together in Zurich once, we did a radio show before the gig and as soon as the host mentioned the name, he started reciting parts of the show, leaving me laughing so much they ended the interview early!”

Click here to check out Andy’s releases on Discogs

D Ramirez was a big mate of Barry’s and told us “I’ll always have that image of Andy peddling the exercise bike with the stuffed German Shepherd dog in my front room after Barry’s wedding party”.

Andy also helped Nick Kazemian and Matthew Dekay form the influential imprint, Lowriders Recordings back in 2004 with both telling us “from the start, Andy’s positive attitude, honesty, expertise and great sense of humour made an impact. We were label rookies and his guidance, professionalism and willingness to explain how the industry worked, really helped Lowriders to achieve a lot in relatively short time.”

Tech house star Jerome Robins, then co-owner of Toronto’s Release Records, together with with Mitch Alexander, who now heads up microCastle pretty much echoed what Nick And Matthew said. “Andy was instrumental in ‘legitimizing’ Release Records. Things really started to take off, once we were on board with 3 Beat. His experience & professionalism was top notch. Andy’s help was an integral part of our success as a brand.”

Former Evolution member, Fluid label boss and influential figure in Sasha‘s Involver production team Barry Jamieson was devastated to hear the news of his passing “Andy was a top geezer and a class act. Very opiniative but always a solid northern lad. We had many a good laugh over the years and shared a love for the dance music scene we have all been a part of for more than 2 decades.”

Peter Van Hal First met him in 1999 when he was the main booker for Extema in Holland. “I already had the music and got in contact with Andy, who just had started with 3 Beat Label Mangement and who was looking for new labels. It was the start of the infamous Deep records, with the likes of Petter, Matthew Dekay, Proluctors, Bart van Wissen, 16 Bit Lolitas and a whole string of new breed producer’s. I went to see Andy regurlaly in Liverpool and always had lot’s of fun, stayed at his places quite often. We spoke at least 3 or 4 times a week on the phone when my labels grew and we became good friends. Vice versa I also booked him to play at festivals such as Extrema Outdoor. His passion was progressive and we always had killer line ups, where he could totally play his own thing and have a good times with all his friend’s from the industry, getting fashionably drunk. He would stay often at my place and we would play for hours. Without Andy and the opportunity I got with 3 Beat, I would never have gotten where I was. He was always working hard looking for great  music and had a fantastic ear. Eventually he grew tired of the music industry and got out of it. Just like me. His passion was fishing and one day got a job for a company that sold fishing gear. He couldn’t have been more happy.” 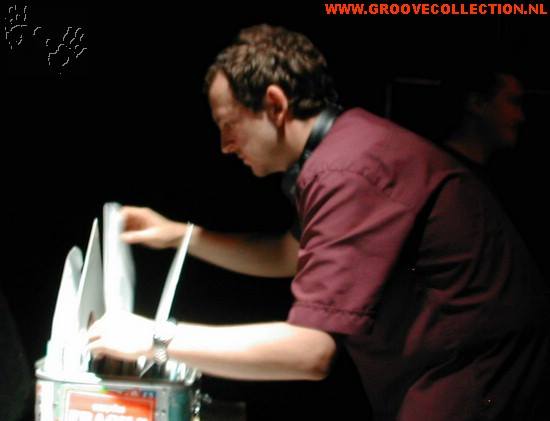 And it’s here where our story about the great Andy Jarrod ends. His contributions left their mark on many and we’re proud to have had the opportunity to tell you only a small part of his story. We’ll let Andy’s colleague Mike Miller have the final word 🙂 “I know you’re up there in fishy heaven, happy as larry, sitting on your boat in a lake full of three-metre-long pike, but remember that CDR of Chable & Bonnici ‘Ride’ that you were so smug about and refused to share with me because you knew I desperately wanted a copy to play in Poland? Well I ripped a cheeky copy on the day you first brought it into the office. Just thought you should know now after all this time x”

Rest in peace Andy Jarrod who passed away on August 9th, 2014. Click here if you’d like to donate to a fund started in his memory, payable to the registered charity – Cystic Fibrosis Trust.