His 4th artist album, ‘Silenciety’, just came out on his own imprint aLoLa Records. We caught up with him for a quick chat.

You’ve had a career in dance music for 20 years, what would you say have been your highlight moments so far?

Highlights? Being alive after this album is the highlight!

This album really took so much out of me, hasn’t ended yet, it’s been dynamically mixed and carefully moulded, it’s sonic drama, you won’t get a better experience from me even if you had me chained to a bed at your will!

And your biggest learning curves?

Always in the process to be honest, I can’t take myself seriously enough. I had the will to learn the violin in one day and played it just for one day on just one track, my arms are reaching out to play it again, trying to hold back the desire, I’m getting wiser with age, so it’s best to be open minded about what I think I know and things I’ve yet to experience that require zero knowledge, it’s never too late to change or learn something you had no idea you love till you try.

Your debut album Sounds From Another Room’ exploded on the dance scene back in the early 90’s and you have been since regarded as one of the top pioneers of tech house. What impact did that have on you at the time gaining such huge attention as a young artist just starting out and what’s been your secret to maintaining a successful career for such a long time?

Always thought pretty much the same as I do now, you’re only as capable as the hours you put in, you master the art, you’ll achieve some kind of success. But your dreams will change through the years, the things that matter the most slowly become clearer, what you choose ultimately for yourself should really stay the same no matter what rate you’re going because the goal is to stay in love with what you’re doing, it’s an ongoing experiment, once that’s gone there’s no going back, you can buy anything but you can’t buy time! Use your time wisely!

Your new album ‘Silenciety’ sees a big shift from your usual sound. What was the motivation and concept behind the album, or was it purely to indulge in experimenting with something different?

I felt the need to bring distant things closer together, division was increasing amongst us as a society and even musically the gaps were getting wider, there were too many groups, too much separation and not enough harmony amongst everything! I never tried to fit in so why now I thought …why make something that’s expected from me? Why not give myself the experience I’m looking for? Why not find a way to join all the dots together, find the missing links, the things we take for granted, the good the bad, the right and wrongs, somehow I wanted to express a little of everything through the album, an experience that has a track or gateway for everyone.

Did you approach things differently to your usual writing methods and in what way did Silenciety challenge you as a writer and producer?

I made it far more difficult for anything to slip through the net, if it didn’t have a certain feeling or texture that made it unusual or independent, I wanted to put together tracks that have an edge, normally struggle to fit in but sound good on their own. That’s the main reason there’s only one track on the album that has vocals and you may not even notice it at first, there’s a lot of hidden sounds and textures you’ll only hear on further plays.

I mixed it like you’d put music to a film, lots of quiet and loud parts that need space but also need to be together.  The main technique was to make sure nothing interferes with the listeners journey, you have to complete it till the end!

Which track on the album are you most proud of?

The track that represents the album as a whole is ‘Cry The Sea Angel’, it’s got the entire spectrum of feelings I still hold today, I still don’t have the answer because that’s not what I’m after, I’m interested in the questions, questions only. I put my heart into it 100%, just the fact that I’ve done it and it’s coming out is enough for me. I’m still in the phase between accepting it, caring about it too much and completely letting it go, now it is going to new listeners who yet to experience what I’ve gone through.

Will you be performing any live shows / touring the album?

I hate to promise, but it would not only be the hardest thing I’ve ever achieved, to play it completely live no sequencers, musicians performing every part on an instrument, it will also be a massive task to pull off professionally because of all the time I’d have to put into it! If I did it, it will be very selective and only a dozen shows perhaps!!

How would you say your sound has matured over the years and where do you see yourself heading musically in the future?

Ideally I want to make more music for films, I’m far more into expressing feelings than the desire to shake the floor! I love dance music and it’s hidden mysteries but it’s rare these days to hear a record that has all the elements that made dance music unique and interesting.

Your run your own labels, aLoLa and Sex On Wax and have also released on labels such as Bedrock, Eye Q, Hooj Choons, Stomp/EQ, Yoshitoshi, Ministry Of Sound, Deconstruction and Tsuba, among others. How vital is it for an artist to run their own label these days and how do you choose which tracks to give to other labels, rather than keep them for your own?

It’s all about putting yourself in groups you want to be associated with to start with, finding a way to get connected! If there’s a label you can work with and they give you artistic freedom, always chose that over doing your own label. If you’re more of a boss and have uncompromising vision, do it yourself. Always put your best tracks out on your own label first, gain interest from others through your own output, it’s the ultimate hustle if you know what I mean!?

What are your plans for the labels moving forwards?

We’ve got albums and mixes coming up from Alex George, Pop Out & Play, a few collaborations I’ve done and some exciting new projects I’m not meant to talk about! I’ll get into far too much trouble unless I keep a lid on things, for now anyway! The reason we’ve not been releasing a lot recently is purely down to my album coming out, it wouldn’t be fair to give less or more time to something over the other so once the albums out I can start thinking of other artists and their records!

You’ve performed all over the world, where on your DJ bucket list would you still love to play?

Glastonbury and one day maybe the Royal Albert Hall! Don’t ask me why!

What do you listen to when you’re not in 16B mode?

The Cure, songs I wrote that I never released, classical, children’s nursery rhymes, Depeche Mode, My playlists of fav tracks I’ve collected through the years. I need to be connected to others musically, if you don’t listen you cannot remember the things you keep forgetting.

What else is on the burner that you can tell us about?

We got a party coming up on July 20th in London, around the corner from my studio in Soho, It’s called Nitty Gritty and will start around 4pm till way past midnight, lots of fun acts and I’ll be playing too, it’s in House of St Barnabas, a great venue and it’s all for the homeless! I’m also doing Burning Man for the first time in August, something I’ve never done before! I’ve said I’ll do it so many times and then something else comes up. It happened very naturally, which is probably the reason why I’m actually doing it this time!

‘Silenciety’ Album is out now on aLOLa Records. The album will also be released as a 2 pack vinyl. Buy Now 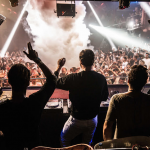 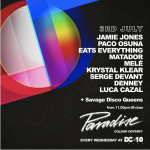