Uto Karem is a titan of the techno world, and his CU podcast is nothing less than exceptional.

Techno was one of the first electronic music genres, and although its sound has evolved over the decades, what defines it has never changed.

Here at Change Underground, we have launched a new Techno only podcast series where we have forthcoming mixes from legends like Ken Ishii, alongside fresh talent, and people who are at the forefront of the genre.

Kickstarting this new feature is Uto Karem who is one of the people that helped lay the foundations for the thriving Italian techno scene. Based in Naples, he has inspired many of the younger generations to have come from the region.

Along with his highly acclaimed DJ skills, he is also an accomplished producer with releases on many labels including Plus 8, which is the massively influential label set up by Richie Hawtin and John Acquaviva when techno was still in its relative infancy.

Since the success of his early releases, Uto Karem has worked with other labels like Dubfire’s SCI+TEC, Christina Smith’s Tronic and his own label called Agile Recordings.

This year Agile Recordings celebrates ten years since its first release, and along with releases from the label owner, it’s also been instrumental in giving early releases to many young artists trying to break into the music industry. It was a platform that gave early support to artists such as Joseph Capriati, and in modern times it’s one of techno’s most respected labels.

The most recent EP from Uto Karem came out via Agile Recordings on the 8th of March 2019, and he plays the lead track “Broken Sitar” twenty-eight minutes into this mix. For those interested, you can pick up a copy from HERE. 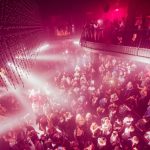