Portable Minds label boss, DJ, producer Jody Barr continues his ascent in the underground. We interview him as part our of one to watch series.

Hi Jody, we’ll ‘try’ and skip questions you’ve been asked in other interviews but we’ve got to start with this one; what impact has Sasha’s seal of approval had on your career of late?

Hi guys, its definitely made a positive impact. Its made people aware of who your are and what your about. Its drawn more attention to my music which is what its all about. Its a lot easier talking to people if they know your affiliation with Sasha and just getting music to other artists etc

You’re DJing at Born Electric over Easter with Sasha’s former protégé’s James Zabiela, who went on to become a legend in the underground. How did you two guys meet? How much respect do you have for JZ and do you have any plans to release on his label?

We haven’t actually met (surprisingly). We were due to play together twice in the past but I guess they say third time lucky, so London is the time.  I have a lot of respect for James, having followed him from his early days when he was championed by Sasha, he’s supported my music from the get go so I’m very lucky in that respect.  I reached out with some unreleased music and got acquainted that way.  He’s one of the very few genuine guys in this business that’s for sure.

The Chinese whispers are at an end… I have some music coming out with him very soon which I’m excited about.

I took a college course for a few years in music tech which I later dropped out of.  That gave Logic classes as part of the curriculum in writing sound for film and Television. Was never really interested in anything else the course had to offer, apart from sitting at the recording desk recording musicians jam during lunch break or in front of Logic.  Jim, a good friend some years back showed me the more complex ropes of Logic.  The way I make music is totally different now but its helped me evolve.  The best advice I’ve been given is ‘don’t change for anyone to fit in, do what you love’

You run your own label Portable Minds. What plans do you have for it and how can people get signed?

The concept of the label is to release music I love and that doesn’t just mean 4×4 rhythms, not just release music when it suits to earn money or build a materialistic reputation for social media. So far with the label, its been the ‘Jody Barr’ show which just my own music, but I am planning other artists to release. Email is my preferred way for demo submission and being polite is also a good start.

What’s the release you’re most proud of to date and what’s been your best memory of playing it out.

My personal favourite on my journey to date is ’Sheilas Demands’. I played this as my last tune in Fabric, the crowd response was immense. i always strive to make the next release better than the last so maybe my new favourite tune hasn’t been made yet?!

Which DJs/producers excite so you the most? Can you name a time recently when you’ve scene a video of a big name dropping your track or read promo sheet feedback from a legend and thought “yes!”

The artists that excite me the most right now would be Dense & Pika, Danny Daze, Roman Flugel, Paranoid London to name but a few.

Seeing Laurent Garnier comment “Druggy and nostalgic, massive” was one of those yes moments I think!

What’s a normal day like for you? Do you have a job outside of electronic music? And what do you like to do when you’re not working on music?

I play Rihanna b2b Beyonce b2b Shakira at the odd gig here and there. Ive gone through many part time jobs and thought ‘This isn’t for me’.. Im very fortunate to have supportive and understanding people around that allow me to pursue me dream with no questions asked.

Its only the past two years I think I have finally hit on a sound where a lot of people say ‘This record sounds like you’. I was always trying to create a specific sound but could never achieve it. I guess that’s where investing in hardware comes into play.  I’m still evolving my sound at present and exploring other avenues. Really excited about some of my recent music.

In terms of advice all I can say is don’t rush, research what you want to do, artists you like, how they make their music. I always like looking up what synths make this sound and so on. Believe in what you do, a lot of producers don’t want to take the long route and they want overnight success for their ego.  Its been a long, sometimes very frustrating process and hope I’m pursuing longevity.

All out nostalgic choice here.. Tears for fears – everybody wants to rule the world

Can you give us your current top 5?

Catch Jody Barr at The Nest, London for a Born Electic Label Party on April 15th. 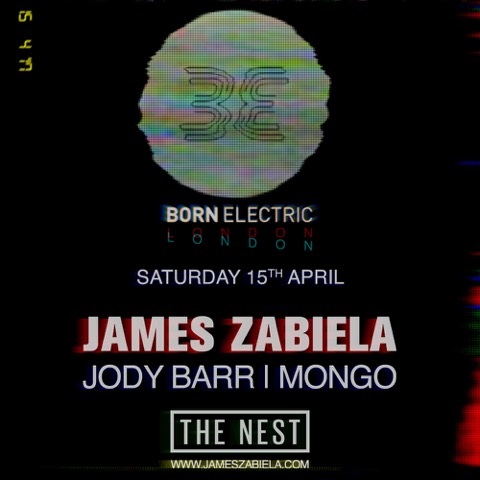