We’re at a time when the underground is starting to grow tired of mass marketed ‘so called underground artists’ along with the corporatism that’s invaded it. The scene has divided itself and the new heroes are those who’re starting to call out the shit show the its becoming. Today we catch up with the emerging Dutch techno producer Rob Hes who shares his thoughts about artists who use ghost writers.

Hi Rob, we last interviewed you back in 2014 and your career has absolutely skyrocketed. Is the any one release or event that you could say that has been the catalyst towards your success today?

Rob Hes: Yes time flies I guess. Always difficult to say what release did help me help with my career. But one of the main reasons is the help Christian Smith and his Tronic label gave me. After Drumcode its the best selling techno label for years now. So it’s really helped. I think consistently releasing your music on big labels is one of the best ways of getting your name out there.

You’ve recently linked up with Yeni’s new label ‘Cyborgs In Love’ and produced a sample pack in conjunction them. What convinced you to support the label in its very early stages?

Rob Hes: I’ve known Yeni since Sonar 2016, and since than we’ve had a lot of contact and become friends. She was always asking for me tracks or remixes, and I had to keep on saying no. A couple months ago she came to me with an idea to make an ‘Artist Series’ sample pack on SampleSound. It was my first experience to make my own sample library so I gave it a shot.

Yeni is really serious with the label and spending more money than most bigger labels. So she totally deserved it.

How much of a challenge was it creating sounds that were different to what you could find elsewhere and just how different will artists find then?

Rob Hes: It was a big challenge and it actually ended up costing me a lot more time than I expected. So I think this will be the first and the last for the coming years haha. But to be honest, it’s been positive because I’m using these samples all the time now. I’m really happy with the kicks and hats. I also included the ‘hat’ from my track ‘Countdown’ in the library, which was released on Oliver Huntemann’s label ‘Ideal Audio’.

We interviewed Christian Smith recently who told us he felt the scene is divided and elitist. So maybe you’re an exception to the rule, because you seem to have built a big pool of contacts throughout the industry and made releases across a multitude of big labels? Do you agree with the point Christian was making? And do you feel it’s maybe harder to make an entry into the scene now, than when you got started?

Rob Hes: I’ve been around in the music music business for a while, but I started quite late in the techno scene. So there is a big difference between when Christian started and I. But yes I agree with Christian.

When I started in the techno scene like 7 years ago it was the same like now. You don’t want to know how many demos I sent and got no answers, or the tracks weren’t even listened to. But if you believe your music is good, then don’t give up, because good things will happen at some point. You also need to think outside the box sometimes if you don’t get a reply to Emails. So maybe try Facebook, Instagram or Soundcloud? And if those things don’t work, takes some tunes on a USB stick to smaller club where the artist is playing and hand the tracks over in person.

What thing are really pissing you off about the scene right now?

Rob Hes: I’m quite frustrated about a few things, but the main thing that upsets a lot of artists behind the scenes, are the the DJ’s who pay just someone to make tracks for them, but say it’s theirs. They just go and buy a track they like from a ghost producer and next thing you know, they’re on Beatport a few weeks later with a hit. It’s a controversial subject really, so that’s why I think it would be great to have a Wikileaks in the music scene.

So Amsterdam Dance Event starts soon, have you got any gigs lined up?

Rob Hes: Yes one week to go. I’m there 2 days this year, and my schedule is pretty full. I have 4 gigs on ADE. I started Thursday with the free event from Cyborgs In Love with a huge line up. I’m also playing at events from Cafe d’anvers and Techno Taco Tuesday (Friday this time). And then also visiting some friends party’s like Drumcode and Tronic night. And than Saturday I fly to Brussel for a gig. So busy it’s a busy week 🙂

You’ve been working hard on your live show, is this how you’re performing at ADE?

Rob Hes: No I have 4 dj gigs with ADE. Much easier to visit my gigs the dutch way. On my bike 😉

What other releases do you have coming up?

Rob Hes: I worked my ass off this summer in the studio, so a lot coming up. On its way: a new ep on Octopus on the 6th of november, December a track on Senso and start the new year with my 4th ep on Dubfire’s SCI+TEC.

And behind the scenes I’ve been working a year and a half on my own label imprint, which will finally see the light in February. I will feature on the first 1st EP and Reinier Zonneveld is doing a remix. Soon i’ll release some more new about this. For any producers reading this, feel free to send your demos: demosrobhes@gmail.com 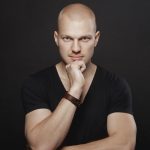