MNTL is the techno alias of Northern Irish artist Montel who also runs his own label Miles From Mars.

New on Miles From Mars is an EP from MNTL himself and it also features a remix from Andre Crom who heads up the OFF Recordings label along with featuring on others such as Ovum, 100% Pure and Tronic.

MNTL has kept his original output exclusive to his own labels including Misfit Music which he also owns half of, but under his Montel alias he has released house tracks on Bedrock, Knee Deep In Sound, Glasgow Underground and Stereo Productions.

Here at Change Underground we have been graced with a premiere of “Evolving” which is a track taken from the new MNTL release on Miles From Mars, and it’s one hell of a techno stomper with a pounding kick drum and sprinkles of acid building towards ethereal pads.

The release is out on the 22nd of April, and you can pre-order a copy from HERE. 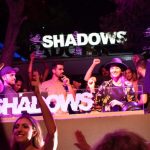