Athen’s based techno duo Who & Who (Sakis and Theo) formed their partnership in 2012 and have soon risen to become influential figures within Greece’s techno scene.

Hey guys, where are you based and how did you first get started in the scene?

Hi Guys. we are Who & Who and we are a duo from Greece. Our friendship has lasted for many years, but our collaboration in the electronic scene started in 2012 only as djs. Our presence in musical production began a few years later, where we started producing tracks with minimal sound and in the last year we ended up in techno music, which exactly represents our sound and our tastes.

Like all of us, we have some musical heroes that have inspired us all these years and we would like to get to it if we can at some point their musical direction. Richie Hawtin, Adam Beyer, Stephan Bodjin, Pan Pot are some of the names we admire and inspire us either in musical production, or as a djs. It’s amazing what artists of this range can give you, because of their experience and talent.

Αs we know techno music is a very demanding and difficult scene. There is a lot of competition and many good producers. We think that what makes us stand out is our sound and our philosophy behind every track. We all want to make our own sound on the musical production and for this, we try so that the public can distinguish us when he hears a track from us. This of course requires time, patience and talent. Οur sound would say it consists of fat kicks , groovy bass lines and dark atmospheres which can make the track special for a dj set and of course special for the audience. The philosophy behind A DJ SET or a track is always unique for each artist. We always want to tell our story, so that the audience can always expect something different from us.

Talk to us about your latest release on Voltage and the inspiration behind it. Who’s been supporting it?

One of our latest releases, is in VOLTAGE RECORDS. A rising Greek Label with already established artists of the scene due to the exceptional work done by the Label boss ANNA V. ‘’Supreme’’ is an inspired record, purely consisting of 3 tracks made with freshness and innovation and represents exactly our current sound. Already, the feedback is really good an the tracks are being supported by big names like Paco Osuna, Joseph Capriat, Luigi Madonna, Spartaque, Steve Mulder and many more…

The musical scene in Greece we would say is very strange. We have a lot of good music producers, acclaimed and rising. As far as the live shows are concerned because, the bigger parties and festivals take place in Athens, where there are too many good DJs and a less venues. So it is a little bit difficult to have gigs often. The big names locally unfortunately they don’t play in Greece often , but there are artists like Kostas Maskalides , CHRISTIAN CAMBAS and Anna V. that represent the techno scene here.

Our Dj setup we think it changes very often. Always we use Ableton Live and Traktor together, along with Traktor Machine and 1 or 2 Allen & Heath midi controllers. Οur goal is always to combine as many things as possible in our set because we want the result of having something new and exciting every time.

Our goals for the future is to release our tracks to top labels of techno scene, co operate with great artists and be part of big festivals around the world. We have already made our plans for the winter, including gigs outside Greece and next releases to very good labels. 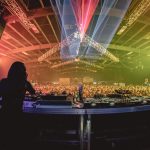